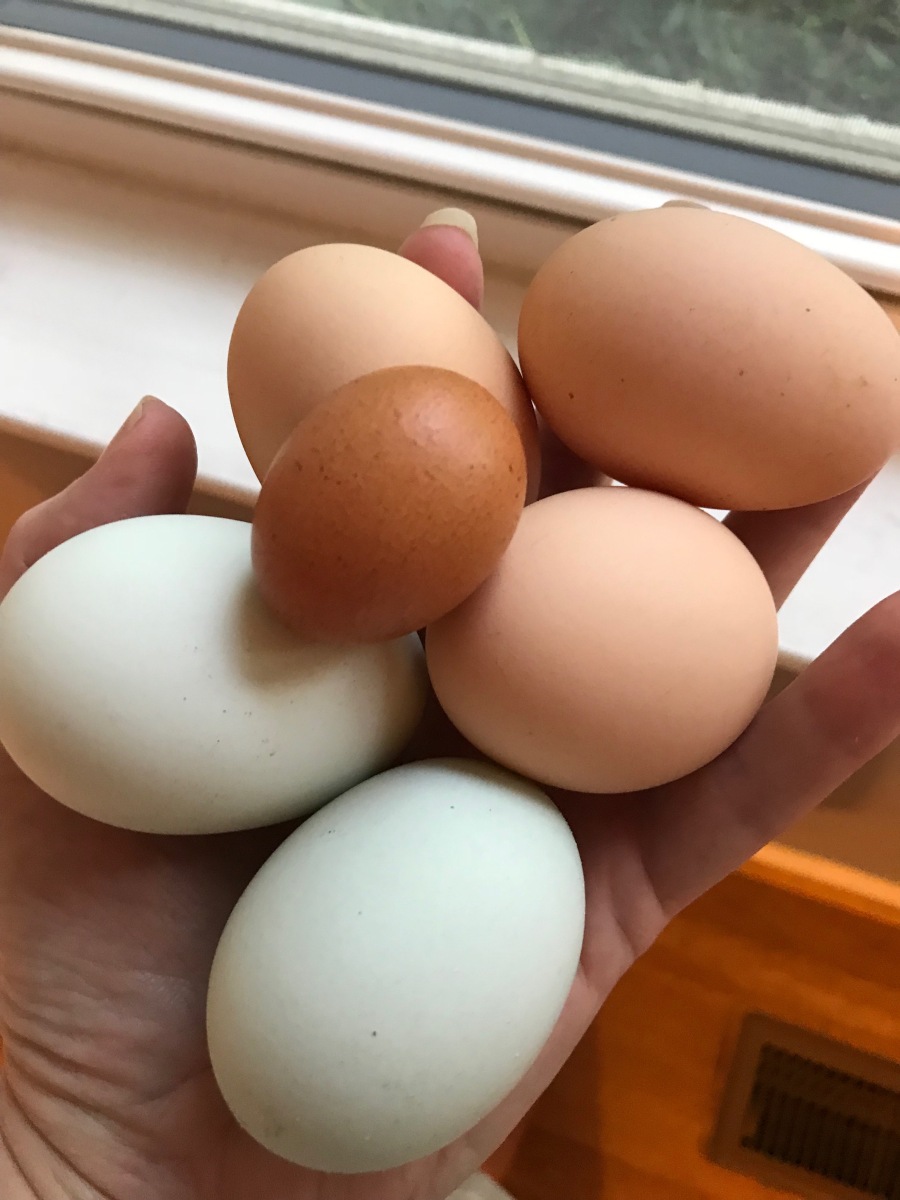 Before I left for our family vacation I noticed that I had a barred rock chicken who was illin’.  Because I was so focused on my garden eRATication efforts, I didn’t have the time to give my full attention to my sick chick, Batgirl. I thought she might be egg bound. And I actually gave her a couple of warm Epsom salt baths- but that did nothing to help her. I had thought I found a stuck egg but in retrospect I think I felt a bone – not an egg. She didn’t seem any better for the baths. By the time I left, she did seem a little bit better. But sadly that was not to last.

When we go out of town as a family, a neighbor generally takes care of our ladies. This neighbor, actually has a vested interest in the girls. She contributed to the effort when we first got the chickens and we give her about a dozen eggs a week. Additionally she comes and takes care of the girls when we are out of town. So she was on hand while we were away.

Unfortunately, I really didn’t know what was wrong with Batgirl. In fact I still do not.  Initially she just seemed lethargic. And her crown was floppy. So other than asking my neighbor to make sure Batgirl drank some water and had food available we were mostly just crossing our fingers that Batgirl would fight off whatever it was herself. Not to be. A few days in, she didn’t really even want to leave the coop. She didn’t seem to have the strength or coordination to move about. Our neighbor would carry Batgirl out to the run, where the waterer and feeder are, to let her drink as much as she wanted and then later would bring her back inside the coop.  This was pretty much the state of affairs when we returned from our trip.

When we got back home, I was heartened to see that Batgirl waddled out of the coop to see me.  I did more research and concocted what I hoped would be a healing gruel. I pulled information from multiple sources in books I have and online.  The gruel I made consists of sour milk (I added 1 tablespoon of vinegar to 1 cup of milk), a couple of crushed up tums for calcium, about ½ a cup of wheat germ, and some cinnamon.  Unfortunately Batgirl was not interested in eating. I could force feed her some of it (I basically got her beak into it) but she really was having none of it. I also would bring her treats she normally loved like comfrey, lettuce leaves, and peas but she just wasn’t interested in eating anything.  I also put her in a small dog cage lined with straw to try to isolate her from the others. The dog crate isolation, however, was also probably too late. When I got home, I noticed another barred rock with similar symptoms.

A day after I arrived home, Batgirl died.  A sad day. My husband, the boys and I held a small funeral service for her and buried her in the yard. We thanked her for the joy and eggs she gave all of us.  And I thanked her for helping me better learn how to take care of her sisters.

But I still had another sick chicken that I wanted to figure out how to heal.  This one, Sweetpea, is a family favorite. Since she was very young, she has loved to sit on us.  If we get low to the ground anywhere near her she jumps onto us. So back to the gruel. This has all been very much a work in progress.  As such, I had been giving the rest of the girls some of the gruel on their veggie treats thinking it couldn’t hurt. And giving them the bowl I had mixed the gruel in to clean out.  And they all seem to love it. So, I moved Sweetpea into the dog cage, gave her water and lots of gruel with greens. This strategy has seemed to help her a great deal. After 24 hours of this she seemed to have largely bounced back.  And the funniest thing. I think she laid this: 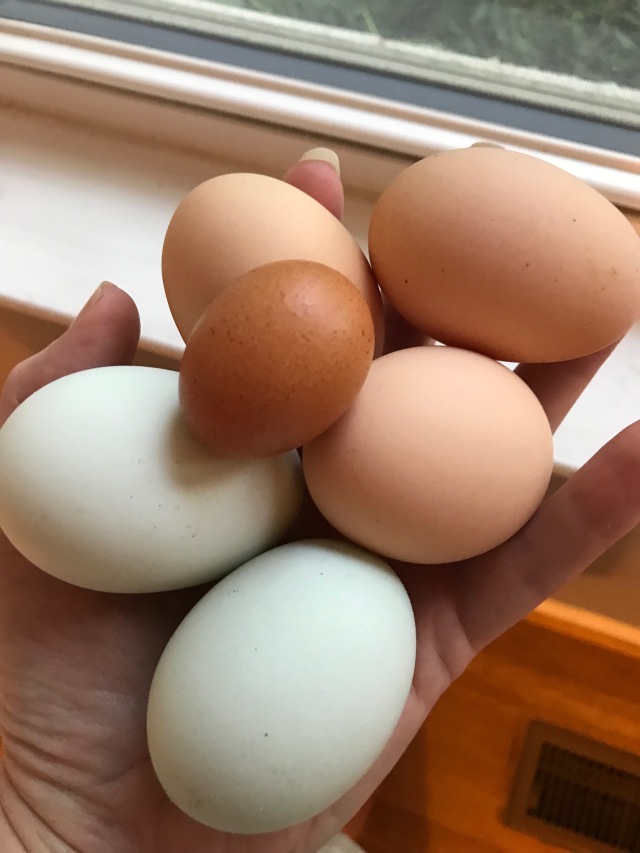 I cannot be certain.  But as you can see I am holding six eggs, so each of the girls laid an egg.  It wasn’t one of my Easter eggers, Satchmo and Sandy, because they lay the pale blue/green eggs.

Yesterday, when I sat down on a bench, Sweetpea came near me and was very interested in me, but didn’t actually jump up on me.  She may not have all of her strength back. But overall, she is running around fine, and looks good. I haven’t gotten any more odd eggs, but I never really know who laid what and I haven’t had another six egg day since, so it’s hard for me to say definitively if she has laid any others.  I am hopeful though that she is soon jumping up on us again soon.

PS – I still really don’t know what was wrong with these two.  Not, egg bound. Thought it might be rickets but checked and their feed has 3.5% calcium so I don’t think it’s that.  This weekend I’m giving the coop a good clean out to make sure there’s nothing in there. But if anyone has any ideas, I’d love to hear them!

PPS – Today I got four normal brown eggs (and 2 blue) – so Sweetpea is laying fine.  Yay!

Hi. I’m Sara H-M. This is where I share my sordid tales of trying to grow food and flowers and make all sorts of things on a small lot in the middle of a small, tree filled city in the Mid Atlantic.  I am determined, grit-full and grateful for all of the opportunities to learn.