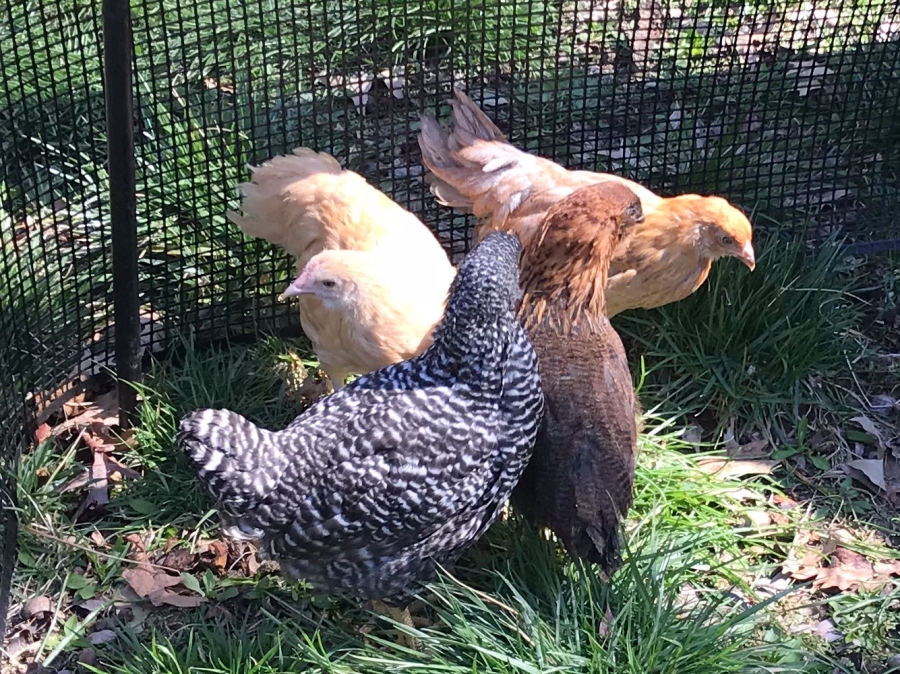 I’ve gotten teenage chickens!  In April four new pullets arrived. It’s pretty darned exciting. Two Easter Eggers, one Buff Orpington, and another Barred Rock. This winter, with six ladies, and all about two years old,  I was only averaging about one egg a day. That’s just not enough eggs for us. Sadly we needed to purchase eggs. Hopefully these new ladies will help. The addition of new girls is actually part of my larger master plan of having a sustainable amount of layers. I need to see how adding four works, I may keep getting a few new ones each year to keep us in eggs as the ladies reduce their laying. But that said, our coop and run probably only can handle about 12 chickens total so not quite sure how that would work…

Here’s the interesting bit, though, I’ve read that for four weeks I need to keep the new girls separate from the rest of the ladies. This seems to be for two reasons. One – so that there can be a transition period for the new ones and the older girls to get used to each other before  sorting the new pecking order.  And two – to keep them quarantined so if someone is unknowingly ill, all are not exposed. And perhaps a third reason, it will give the new girls time to grow a bit more and be better matched in the pecking order smack downs.

All that said, when I first learned that I needed to keep them separated, it blew my mind a little bit. Two years ago we spent a ton of time and money building our sturdy coop. I wasn’t building another one. But then I realized that, really, I want to keep them in a way so they could see each other but not actually interact. That helped. Our run is eight feet wide by 24 feet long. Long enough to partition off a section for the new girls and still leave enough room for the older ladies.

After much puzzling on where to create this new space, I finally landed with fencing off the space under the raised coop. This keeps the new girls in a protected area with a solid roof.  The partition hangs from the bottom of the raised coop. Using a plastic, pliable fencing I had on hand allows the two camps to see each other but also keeps them separate. The only real issue is that I needed to get on my hands and knees to change their water and add food.

To keep them occupied I also made them a wee roost.

But, I never saw anyone ever use it.  They would just walk around it.  Oh well.

From outside, the older chickens pecked a bit at the fencing but it sturdily kept them out. Confined under there, the little ones started sorting out their pecking order amongst themselves. Very fun to watch. Much baby squawking and jumping. I just needed to refill food and change the water on my knees in the morning. Before this adventure, I could say – never have I ever had a chicken peck me in the butt.  Sadly, no longer.

This outdoor chick pen is where I put them when they first arrived.  I still find it so crazy that young chickens can be shipped in the mail. When I got the box’o’chicks from the mailman, I quickly took them out of the box and released them into this pen.  I had already set out water and crumbles. The new girlswere pretty wigged out.

But oh so cute!  One of the Easter Eggers is golden with great gray plumage along her back and tail. It looks like she is wearing a ball dress. I named her Gloria. The Buff Orpington is a great creamy gold color. I unimaginatively named her Buffy.  The other Easter Egger looks like a cross between my two older Easter Eggers.  Really cool. It took me a bit longer to name her. Then there is the little Barred Rock. I’ve resisted naming her because I can never tell the Rocks apart once they are fully grown. Although I had some choice ideas that first night.

On the day they arrived in early April I had a simple plan. I intended to collect them, one at a time, put them into a large plastic storage box filled with a bit of straw, and dispense the lot of them in their new under-coop digs  What I know about how chickens behave I have learned from my older girls. I raised those girls from day old chicks. They love me in their chicken way and know that I am the source of good things. They run to me every time I see them.  So, when I went into the pen to collect the new pullets, I didn’t tightly pin the bottom of the fencing closed.  Big mistake. I got the other three pullets into the box but as I turned around to collect the Barred Rock, she found the opening and escaped the pen. Now she had the free run of the yard. And ran away rather than towards me. I chased her and chased her and chased her. So glad we do not have a yard cam that captured that ridiculous chase. I nearly gave up. I started to get my head around just having three new pullets… But then, finally the escapee scrambled under some brush that was solid enough she couldn’t get out. And I triumphantly grabbed her little butt. Really not an auspicious start to this adventure.

The next day I was much better prepared. I took many more precautions to make sure they couldn’t sneak out when I was collecting them. I was home for a few days so for a little while I put them out in the pen during the day and penned them into their under-coop space at night.  Their primary living space was under the coop for about a month.

After about a month, I had to start integrating the new girls with the older ladies.  Boy has that been eye opening!

Hi. I’m Sara H-M. This is where I share my sordid tales of trying to grow food and flowers and make all sorts of things on a small lot in the middle of a small, tree filled city in the Mid Atlantic.  I am determined, grit-full and grateful for all of the opportunities to learn.

Good golly! I’ve never come close to having as many strawberries 🍓🍓🍓as I have this year! All from our front yard. Simply amazing what rain and sun can do. So glad I had the time and wherewithal to make jam. 😊😂 - - - - - #sograteful #strawberries #strawberryjam #modernhomesteading #urbanhomestead #frontyardgarden
I planted a bunch of seeds in the early spring to grow flowers for the bees. They are still quite tiny(last pic) And all of the bulbs I planted for them have long since bloomed. I’m hoping they 🐝🐝🐝 find some of these 🌸 🌼🌹🌺... - - - - - #beekeeping #urbanhomesteading #urbanbeekeeping #backyardbeekeeping #modernhomestead #sograteful
My honey bees 🐝 finally arrived. Seems like it took forever. And installing them into my hives was no easy feat. But they are now in their new home and exploring. Just in time for World Bee Day (yesterday) 🐝🐝🐝 - - - - - - - #beekeeping #honeybees #urbanhomesteading #beesfeedtheworld #moderndayhomesteading
Chocolate hearts on Valentine’s Day.....That counts, right? 😉😊😍 - - - - - #feelinggrateful #eatseasonally #urbanhomesteading #somuchlove #ilovechocolate
My meager late January Homestead-made pantry. I’m shooting to double this for next year. I’ve made a goal of producing and eating more food from our homestead in 2019. Read all about it on my blog. - - - - - - #homesteadgoals #eatmorefromthegarden #urbanhomestead #gratitude #growyourownfood #goalsaregreat
Merry Christmas! 🎄One adventurous Red drumming up interest in our new automatic feeder. Its supposed to keep out rodents and keep in food. A girl can dream right?😉🤞🤞🤞 - - - - - #chickenkeeping #urbanhomestead #gratitude #feedingchickens #automaticchickenfeeder #urbanfarming